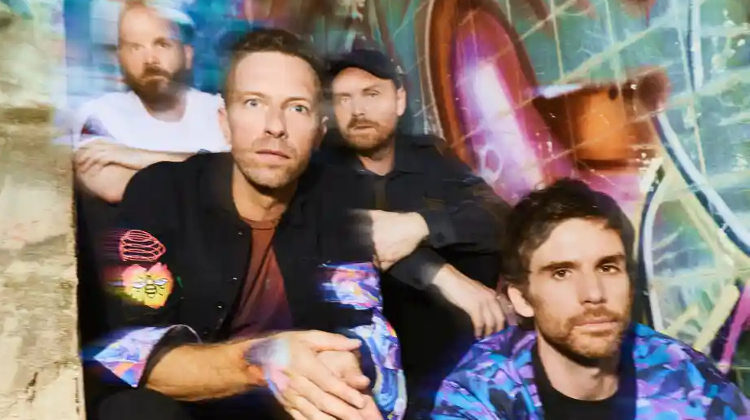 Coldplay’s ninth album is a powerhouse of surging melodies that take you on an intergalactic journey whilst exploring the highs and lows of human emotion.

If you hadn’t heard by now that Coldplay were releasing a new album, you must have been living under a rock for the last six months. In contrast to the classified ads in local newspapers and single typed-up note posted online announcing 2019 double album Everyday Life, the boys really took everything up a notch for this record. It’s been plastered on billboards across the world and all over social media; messages were hidden in a special alien language for fans to decrypt, ala Twenty One Pilots style; they played at the Brits, BBC Radio 1’s Big Weekend, Live at Worthy Farm, Global Citizen Live, and just about every talk show imaginable; teased collaborations with some of the biggest acts on the planet; and even beamed their lead single into space. There really was no escaping it.

Ninth studio album, Music of the Spheres, is a conceptual piece about a distant solar system called the Spheres. They’ve even gone so far as to show us the schematics; in a brief trailer called Overtura released back in July, viewers are whisked through an animated cosmic journey of each planet, all of which have names and are twinned to the 12 tracks on the album. Co-produced by the Swedish pop superpower behind Katy Perry’s Last Friday Night, Taylor Swift’s Shake It Off and The Weekend’s Blinding Lights, it’s no surprise that the album is packed full of explosive sounds, soaring melodies and funky electronics that take you to another galaxy.

Lead single, Higher Power, is a prime example. That thrumming, high-speed beat and 80s keyboard feels straight out of a Jane Fonda or Richard Simmons jazzercize video. Gone are the subdued, pensive moments of the previous album; this track is full-blown euphoria, the chorus bursting to life in swathes of synth-pop. It’s got the same kind of colour and light as 2012’s Mylo Xyloto and 2014’s A Sky Full of Stars, co-produced by the late legend, Avicii.

A lot of the record follows in suit. Humankind is another high-speed, chirpy anthem that radiates Coldplay’s boundless positivity. It relates the tale of a rebel DJ trying to spread a message of love and inclusion on an outlawed radio station and the reactions of those who hear it. ‘We were trying to zoom out a little bit [and] use the universe and the cosmos as a metaphor for the difficulties and wonderfulness of life on Earth,’ drummer Will Champion stated in a recent interview. The song closes out with the lyrics, ‘We’re only human / But we’re capable of kindness / So they call us humankind’ – and whilst the message is as cliché and syrupy as it gets, it couldn’t be more timely after the last few years we’ve had.

The most anticipated track was without a doubt third single, My Universe. Ever since BTS covered Yellow for MTV Unplugged, the internet blew up with rumours that a song was in the mix. Since then, the collaboration between two of the biggest bands on the planet has landed firmly in the number one spot both in the UK and US and been streamed over 110,000,000 times on Spotify. If you’ve heard it, you’ll understand the hype; it’s a bubble-gum pop track riddled with sky-high synths and plays on the feel-good factor. Yes, it’s incredibly corny with lyrics like ‘that bright infinity inside your eyes’ and ‘we are made of each other, baby’; but it’s infectious. I defy you to listen to that chorus more than once and not want to spontaneously burst into song. You have to give it them – Coldplay know how to make a hit.

And the big names just keep coming, as Selena Gomez duets with Chris Martin on Let Somebody Go, a track that feels reminiscent of 2014’s Ghost Stories with its airy, lo-fi sound, heavy beats and melancholic lyrics about lost love: ‘I loved you to the moon and back again / You gave everything this golden glow / Now turn off all the stars ’cause this I know / That it hurts like so / To let somebody go.’

There’s just as much power in the slower moments of the album. Human Heart, an ambient acapella track featuring vocals from sister duo We Are KING and jazz musician Jacob Collier, is the crown jewel of MOTS. Open and atmospheric, with flawless harmonies and reverb that sends shivers through your skull and down your spine, it beautifully depicts the fragility of the heart from both male and female perspectives in very few, simple words. And despite the almost ear-piercing falsettos on Biutyful, it still manages to be a great track, with a downtempo melody and hip-hop beats that could be plucked from likes of Easy Life, Still Woozy or Clairo.

It’s not all rainbows and sunshine though. People of the Pride takes a sharp U-turn, charged with Johnny Buckland’s dirty, distorted guitar riffs and lots of loud brass sections. It’s as far from Coldplay as you could possibly get, preaching about standing up to the man in more Muse’s 2009 Resistance style. You’ll either love it or hate it.

The record closes out with Coloratura, a 10-minute experimental soft rock song that feels inspired by the likes of Pink Floyd. After all that high speed, frenetic synth work, it gives you some space to breathe, opening with twinkly keys and dreamy harps before the woodwinds and percussion come in, sounding like an enchanted woodland lullaby. Buckland gives us a hearty riff that feels very 2005 X&Y-esque and Martin starts chanting in that familiar Coldplay fashion that you know will go down a treat with fans at the stadium shows. It’s the piano-led ballad we’ve all been waiting for, synonymous with Coldplay.

Many will say that this album was purely strategic; that the band were afraid of becoming beige or fading out of sight, and thus latched on to every music trend currently going. And there may be some truth in that. But they are also to be applauded for their constant evolution. Since their inception, they have never put out two albums that sound the same and keep challenging themselves to try things that may not please the masses (take Everyday Life, their most experimental and lowest selling LP to date). They’ve dabbled with synths and dance music before, but never have they reached for the stars (quite literally) like this.