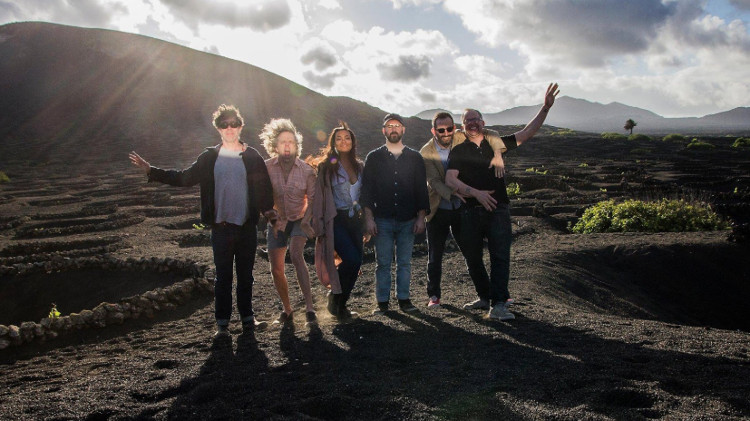 Prepare yourself for a huge burst of energy and some extremely lively tunes when you listen to !!!’s new record; Certified Heavy Kats.

As the American six-piece have recently stated on their socials, they took some wild chances on this one and that certainly does not come as a surprise as soon as you tune into this EP. The band has so much to offer and to showcase but no one could have quite expected a record like this, especially at a time like this.

It’s fairly long for an EP but short for an album, however Certified Heavy Kats is a record that will leave listeners wondering what music genre they have just listened to. With its many twists, turns, peaks, troughs, shouts and screams, this is a selection of music that you can call many things but one adjective that nobody will associate with it is: boring.

As soon as the record begins through opener Do The Dial Tone you can’t help but feel that it’s destined to be played at a hardcore rave or blasted out during a heavy workout. One thing that is certain is that you do not expect it to sound like it does. When live music eventually returns you cannot help but imagine heads bopping and mosh pits forming for this one. This is a tune that wouldn’t seem out of place in a 90’s trance album; it comes as a surprise from a group of !!!’s nature but that surprise is more than welcome.

Just when you didn’t think it was possible for an opener like that, the experimental group hit you with Maybe You Can’t Make It. It seems to maintain that electronic sound and totally moves away from rock music which, whilst very different, it isn’t exactly a bad thing. The song fades out with a questionable sound and does seem to just be loud noise in some areas but despite this, it is great to hear how experimental !!! are being. This is definitely not a track for the faint hearted.

Tighten the Grip follows and as we approach the middle section of the EP, you can feel the pace slowing down, even if the experimental vibe stays. A heavy presence of the drum beat is felt as distorted voices and a strong build up is demonstrated throughout. It sounds as if you’re listening to the main menu music on a space adventure game; it’s out there but it is great.

Next up is Let It Fall and at this point you gather a feeling that every single track on this record is going to be completely different to the others. This is a much calmer track and showcases Nic Offer’s voice very well, his tones seem considerably clearer than in its preceding tracks. Shortly after this, Wonderful Life has quite a chilled style to it and the rhythm is almost identical to Let It Fall. The instrumental towards the end could seem therapeutic to some and damn right weird to others. It does, however, make for a song that could be played in many environments.

As the final third of the record approaches, you reach Take It Easy. The song suits its title down to the ground as you feel more of a style of relaxation throughout. The backing tune at first seems a little heavy but as the lyrics enter you feel slightly more calm with an easy presence to the music.

Walk It Off closes,  picking the energy right back up and could possibly be considered as the best track out of the seven on offer. This is a song that showcases the band’s versatility and a great advert for the band otherwise known as Chk Chk Chk. It wraps up an extremely experimental album as it leaves the listener wondering what type of music they may have just spent the last half an hour listening to.

Talk about unpredictability! That is exactly what you get when you listen through Certified Heavy Kats and it’s obvious that this is an album that will grow on people with time. It certainly is not predictable and that can only be a good thing. After giving this record a full listen through, you can’t help but feel intrigued and excited to see what the US band will bring out next.