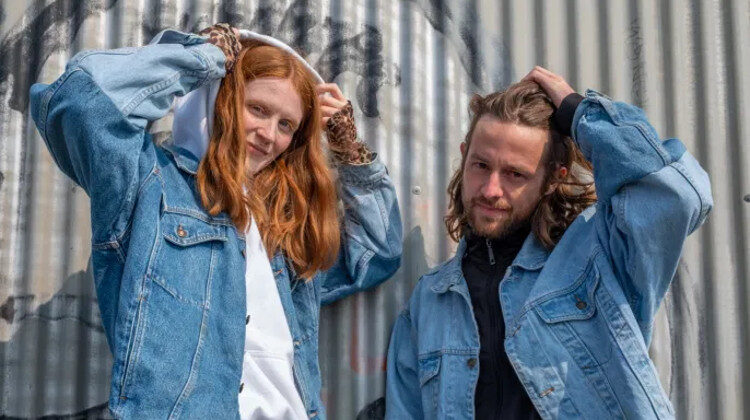 To release their debut album in two halves is testament to BSÍ and their maverick approach to making music. This comes alive throughout Sometimes depressed…but always anti-fascist.

The Icelandic duo, Silla Thorarensen and Julius Pollux Rothlaender, formed BSÍ as two best friends, both experimenting with instruments they didn’t know how to play. A little uncustomary to say the least, but the duo’s honest, imperfect, and somewhat whimsical journey through life together shines through in this album.

Sometimes depressed… but always anti-fascist, an aptly named two-part compilation of 5 songs, boldly jumps from contemplative and melodic indie-pop to expressive riot girl punk. The meaning of the songs are sometimes ambiguous- but touching on issues such as sexism and feminism, it’s clear that BSI are unafraid to speak their minds through their lyrics.

The Sometimes depressed… half of the album lets Silla’s gentle yet emotive vocals take centre stage, harmonising beautifully with Julius’s dreamy synth strings and pads. TAL 11, however, is a little different to the other 4 tracks, with a smooth, sultry lo-fi punk sound, hinting towards what’s to come on the latter half of the album. My lovely is the first track, and captivatingly progressive, starting off with slow synths that build up to an acerbic end. Uncouple is perhaps the most traditionally structured track on this EP with a softly set verse and chorus, but remains true to BSI’s novel experimentality, being tinged with mystery through distant-sounding synths and vocals.

25Lue feels like a track from the ’80s and is perhaps the most technically impressive on the album, featuring texturised lo-fi synths that seem to sonically evaporate whilst Silla muses, “surely something, better coming?” It is Old Moon that seems like the special track here though, almost cinematic in its delivery… Silla sings longingly over guitar strings dowsed in reverb, accompanied by soft tambourine shakes.

Vesturbaejer Beach, a celebration of the first day of the Icelandic summer, almost smacks you in the face with its infectiousness. It’s a real indie summer song that’s difficult to not bop around to. Notably more upbeat, the song’s light-heartedness is a well-chosen opening track for transitioning into the second EP.

Feela Pao has a bit of a Siouxsie and the Banshees feel to it: rebellious, cacophonous, and very punky. As the only track to feature Julius’s vocals, it does so with a statement as he roars, “I own my body, it’s not a place of legislation.” Based on the name, you’d expect My knee against kyriarchy to be another fracas track, but it’s unexpectedly light, with a sweet but punchy melody.

Donakallalagio really packs a punch and definitely the most fierce and punkish on the album. It’s a bit like a Sex Pistols track for the riot girl. However, it homes in on Silla’s notable vocal ability in blasting out those high-octane notes, and she really does so in an unwavering fashion. Alltaf alltaf stundum alltaf completes the EP, a slower-paced punk track that has the added element of answerphone messages and a telephone conversation thrown in to keep you on your toes.

This debut album from BSÍ depicts the duo’s skillful experimentalism by unconventionally switching from reflective and escapist sad-Indie pop to liberating and upstanding punk. There are tracks that could be more texturally layered with both vocals and instruments. But as the first album from these two fun-loving best friends, they on the radar as one to watch.