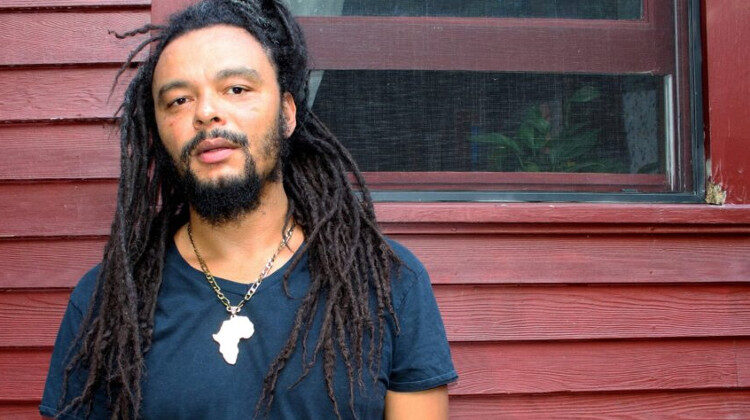 Indie-folk with an eclectic array of sounds that tell an unbridled, Brown Bones tells relatable tales of life’s highs and lows.

If like me you saw the name ‘Brown Bones’ and it didn’t ring any bells, let me assure you that you are likely no stranger to his work. Pseudonym for the highly talented producer, musician, and visual artist that you may know better as Andrew Moon Bain, he’s collaborated with the likes of Snoop Dogg, Wyclef Jean and Diplo, helped to establish two reggae labels, and received a Grammy Award nomination for his work on Snoop’s Reincarnated in the process. Clearly, he’s not new to this.

His debut self-titled album Brown Bones has been the work of a lifetime. Although it was pulled together over the 18 months of lockdown, it tells the tumultuous tale of life so far – all its beautiful highs and painful lows – intricately woven with tributes to Pacific Northwest folklore, like the subtle references to the Chinook legend of Blue Jay and Ioi on These Old Ghosts.

It’s unexplored territory for our veteran. Traditional indie-folk with a twist; infusions of sounds that take us on a journey of his life.

Downtempo Siren Market is a prime example. It’s a fairly basic track that loops back round, but the reverb on the electric guitar gives it this gorgeous warm, summer feel that’s transportive – I can honestly feel the tropical island breeze as I sip mojitos under the setting sun, the waves crashing at my feet (one can dream right now). It’s like a hazy, old memory – paying homage to trips to the West Indies that irrevocably changed him.

But the record is also tinged with melancholy and a sense of wistfulness, full of fragments of experiences that shaped him in other ways.

Arjanine is the lead single off the album and undoubtedly a standout track. It opens with a few gingerly strummed out chords as Bones sings a sombre tale of woe – ‘Arjanine my love / Where have you gone? / Left you in the tub / To wash away the harm / Oh, some pain won’t go away / And some will leave you forever changed.’ ‘I had just been in a pretty bad motorcycle accident with my lady at the time, in the Dominican Republic.’ Bones said, reflecting on the moments that changed his life and gave inspiration to this song. ‘We got hit by a car while driving on the side of the highway. It all happened so fast, we ended up being air-lifted out of the country, back home to NYC Mt. Sinai hospital. It was a couple months later, during the recovery stages, that the song came to me.’

But whilst this song tells a story from his life, it relates to a lot of us too. He sings of ‘scars that are there to stay’ and a crushing sense of isolation, feeling trapped in our own grief with ‘nowhere to run’ or ‘hide’. But ultimately, it’s a message of hope. As the track progresses, the music swells to a crescendo in a symphony of sounds – strings, trombone, melodica, piano, the works (courtesy of Phillip Peterson and Andrew Stoch). It’s gradual, and the song goes back and forth like this, just like the process of healing.

Overall, the record isn’t perfect. Some of the songs feel homogeneous and the imagery can be contrived in places; Over the Border springs to mind, with its tired allegory of the government as a ‘queen bee’ and the rest of us as worker drones ‘gathering nectar for the hive’ that falls flat. But there’s no denying that he’s a brilliant storyteller otherwise, both lyrically and musically. He’s bared his soul and it shows as an earnest, heartfelt body of work.