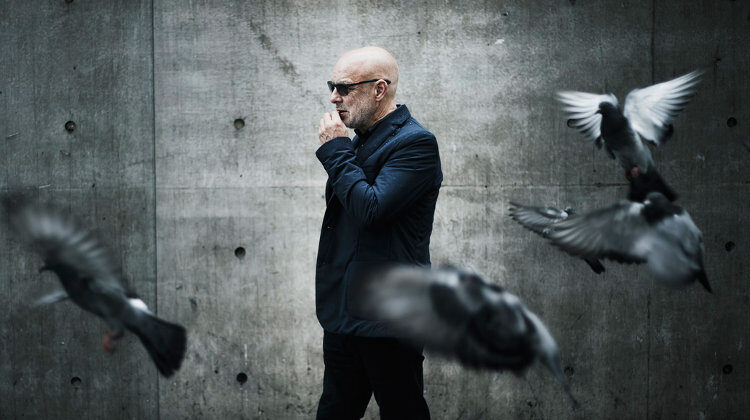 Back in the early 1990’s, Brian Eno’s star had faded to an extent; despite the populist kudos of producing U2 and a new generation of electronic progressives venerating his influence, his commercial and creative peak seemed to have receded far into the distance.

With the luxury of the passage of time and some retrospection often comes a freshening of perspective, and the twenty-first century is ready to reinvigorate accepted opinion on two neglected Eno recordings from that decade: Wrong Way Up and Spinner.

Both albums have now been given a new lease of vinyl life by the All Saints label in order to coincide with the thirtieth anniversary of Wrong Way Up and the twenty-fifth anniversary of Spinner, neither of which have been available in a physical format for fifteen years. Both items have been generously furnished with additional bonus tracks (including the classic Stravinsky), interviews and essays.

Let’s start with Wrong Way Up. Unleashed in October 1990, it marked Eno’s first complete album of songs since 1977’s sublime Before and After Science, and despite its myriad charms it has strangely never received the wholehearted embrace of many items in his canon.

The voice, bass, piano and viola of John Cale were key ingredients of perhaps the most influential band of all, The Velvet Underground, and after their demise the Welsh singer-songwriter conjured a series of intriguing releases off his own back; Paris 1919 and Fear are particularly worth investigating. He also cultivated a gilded side-line as a bespoke producer of other talents’ era-defining work, from debuts by The Stooges, The Modern Lovers and Patti Smith to a slew of Nico albums and of course Nick Drake’s gorgeous Bryter Later.

In many ways, Eno was a cultural counterpart, propelling the early works of Roxy Music, becoming a forward-thinking pop auteur in his own right as well as a distinguished enabler of others’ talents (Bowie’s acclaimed Berlin trilogy, three seminal Talking Heads albums), a prized collaborator (his work with Krautrockers Harmonia in particular) and an official ‘ambient godhead’.

Appearing to be obvious musical bedfellows, there was always an inevitability of them getting together. The pair first worked together on the mythical June 1, 1974 album with Nico and Kevin Ayers at Rainbow Theatre, before later hook-ups on Eno’s Another Green World and Music For Films and Cale’s solo works, Fear and Words for the Dying.

Diligent attention to sleeve credits on Wrong Way Up affirms that most of the material was written by both parties, with specific guidance as to who wrote which lyrics. Eno wore the producer’s hat in the studio, though Cale also received a “co-producer” mention. The sessions were fraught with much tension and friction and characterised by mutual loathing, yet this has appeared to harness dollops of creativity and inspiration: both artists bring their best to the party, making for a fascinating and thoroughly enjoyable meeting of great minds.

Both artists manfully trade vocal duties, harmonising magically on a vibrant set that prepares skewed, homespun pop melodies over a sultry bedrock of African rhythms; there’s a palpable, infectious spring in its step. The opening Lay My Love anticipates the jittery art-funk of Field Music and School Of Language, with the stirring, sample-bait violin loop proving impossible to erase from your head. One Word is similarly effervescent, enlivened by Fripp-leaning rhythm guitar chops from Robert Ahwai and volleys of vocal sparring with a David Byrne stripe running through it. Spinning Away is the record’s rousing and glowing centrepiece, a warm, Balearic cocktail of airy vocals, knotty funk licks and swirls of violins. Elsewhere, Cordoba and In The Backroom both exude a certain noirish melancholy which suits Cale’s lugubrious pipes, whilst the dial-down ballad, River, could be a pastoral outtake from Another Green World or Before And After Science.

Released in October 1995, ‘Spinner’ served up a clash between Eno and ex-PiL bass legend Jah Wobble which resided “in the hands of Jah”. Although the lesser of the two re-releases, this tag-teaming session represented an intriguing union, marrying the leader of The Invaders Of The Heart’s pulsating low-end rattle to the meditative spaces of Eno’s space-opera reverie. It’s a curious hybrid, a consolatory sequence of inner-space ruminations beefed up by subterranean, cavernous bass shudders.

Left Where It Fell and Marine Radio both dip into the ethnological collage style of Eno and Byrne’s My Life In The Bush Of Ghosts, the title cut veers towards Can’s thrumming Krautrock and Transmitter and Trumpet anticipates The Orb’s majestic dub-ambient quiver.

Spinner achieves a finely weighted balance between liquid ambience, visceral slabs of musique concrete and cerebral funk; it occasionally lapses into wallpaper muzak but there’s much to enjoy in getting lost in its fervent strangeness.