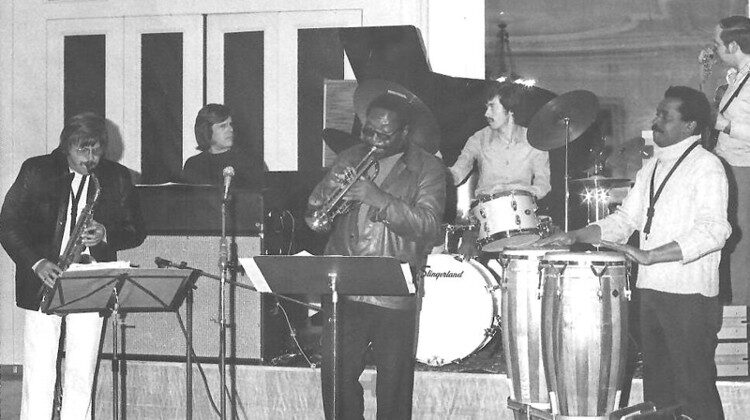 In the sixties and seventies, a community of forward-thinking kindred spirits including Swiss pianist par excellence Jean-Francois Boillat cultivated a thriving cult jazz scene in the vicinity of Lake Geneva.

Fired by the nascent Montreux Jazz Festival, its stand-out act The Boillat Therace Quintet, comprising Boillat, flautist and tenor saxophonist Raymond Therace, drummer Eric Wespi, bassist Frederic Pecoud and percussionist Rogelio Garcia, recorded their self-titled debut in 1974 on PMP Pierre Maire Productions, a low-key private press which had few funds available for a marketing budget. As a consequence, this little-known rarity quickly disappeared into the ether, eventually fetching sums of up to £250 amongst eagle-eyed collectors of Swiss jazz. The sterling reissue imprint, We Release Jazz, has now excavated this striking gem, generously decorated with a slew of bonus cuts from the original sessions.

The record commences with the super-charged 1224, a lilting paean to Geneva’s public transport line Tram 12; reedman Therace’s airy flute slithers around the cusp of free jazz and melodic verve and the deadly rhythm section keeps the infectious, warm-toned groove cooking, refusing to let anything flag. The band drops the temperature a notch on their tender version of Roland Kirk’s Sweet Fire. This is distinguished by the pianist’s emotional punch, expressing the melody with the right dose of patience and tranquil personality.

On the mercurial Cenovis (named after the Swiss version of Marmite), Boillat slips into Fender Rhodes and conjures the sleek sheen of a limo glide whilst Therace’s rich tenor soloing builds from understated to a sinewy exuberance. The quintet dial things down for the lovely slow burn of In Your Quiet Place, a painterly, chamber-like ballad that casts a slowly uncoiling spell akin to rocking to sleep; the ear-caressing piano manoeuvres around the contours of the theme with a bewitching clarity and soulful ingenuity.

A rousing cover of Freddie Hubbard’s Straight Life mines an Afro-beat pulse with a maelstrom of strident solos and the quintet’s treatment of Herbie Hancock’s ‘Dolphin Dance’ is driven by a rise and fall in intensity and showcases the piano at its most mellifluous.

The legendary Wayne Shorter’s soul-jazz totem, Adam’s Apple, is rinsed down in the roaming, modal style of the trailblazing 1970’s independents Strata East or Black Jazz, with Boillat’s chocolate-like Fender Rhodes to the fore.

Traversing modal waltz, soul-jazz, funk and bop styles, this fresh-sounding reissue is a testament to the inherent musicality and versatility of all personnel involved; this is music of a rare quality.