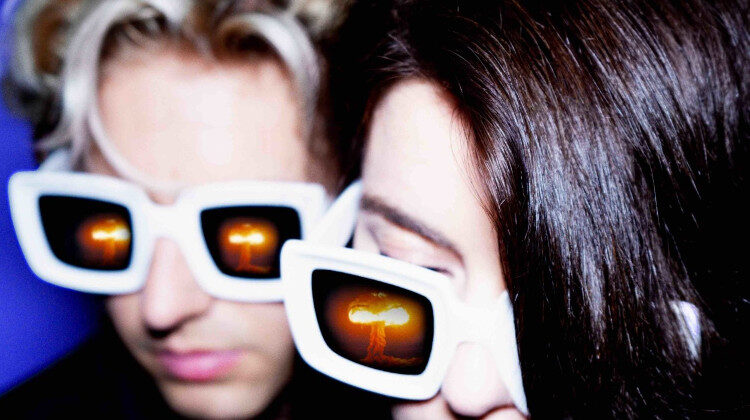 Brighton-formed alt-rock band Blood Red Shoes bring in the new year with a new album, and a brand-new sound to match.

Laura Mary-Carter and Steven Ansell have spent seventeen years making music together. As the pandemic was redefining the world, they decided to redefine their image—their sixth album, GHOSTS ON TAPE, marks their darkest, most off-kilter release since Blood Red Shoes’ inception.

The album dives into both the abnormal and the paranormal; out of its thirteen songs, there are three 36-second intermissions, full of grainy static ((i’ve been watching you), (what have you been waiting for?)) and eerie, keening voices ((you claim to understand)). Owing to the band’s interest in true crime podcasts, the others are told from the unsettling perspectives of the most extreme kind of outsider: serial killers. As Ansell explains, he and Mary-Carter have “always been outsiders right from the very beginning. We have made an entire career out of being told what we are “not”, of being rejected, of not fitting in, and this album is us deliberately pushing into all of our strangeness, emphasising all of the things that make us different.”

The album has its highs: MORBID FASCINATION sees Mary-Carter storytelling in soft-focus above a gritty instrumental, comprised of dark, choppy synths and a siren-like guitar riff, while MURDER ME balances her airier vocals with the appealing, weighty thuds of a kick drum. It also has its lows (the album starts to sag around the middle, before picking up towards the end), and its mediums (the lukewarm COMPLY, whose cinematic instrumental attracts more attention than Ansell’s vocals). For an album founded on ‘pushing into strangeness’ and emphasising difference, it doesn’t stray far from the existing alt-rock scene, sonically; Ansell’s vocals on GIVE UP and I AM NOT YOU call Frank Carter and the Rattlesnakes and IDLES to mind, but that isn’t such a bad thing. What’s more of a shame is that, although Blood Red Shoes’ members have been playing together for seventeen years, they’re more often separate on this album. DIG A HOLE, which brings in both vocalists, is a riot—complete with fuzzy bass, surf-rock-esque guitar and an impressive drum score. You only wish there was more of the same.

Still, GHOSTS ON TAPE is impressive for its brash confidence; not only do Blood Red Shoes not shy away from airing their ‘ghosts’ on tape, they invite the listener to join them. “Ultimately this album is an invitation”, says Ansell. “It’s us saying, this is our world, these are our darkest thoughts and feelings – our ghosts – caught on tape. You are welcome to join us. Come and embrace the strange.” It might not be prudent to accept invitations from strangers, but if the invitation sounds this good, maybe—just this once—it’s alright.