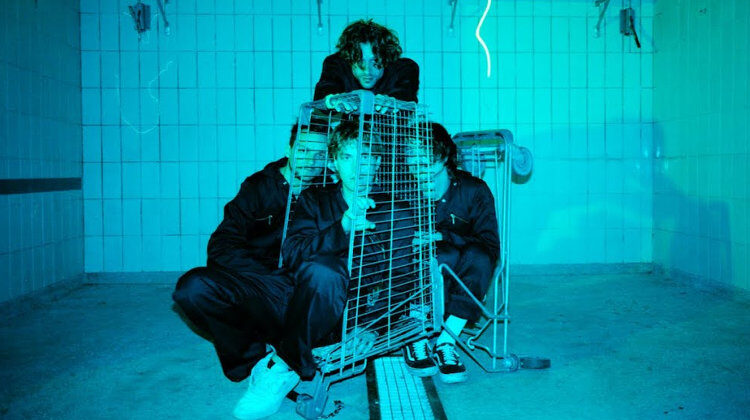 Munich-based alternative rockers Blackout Problems return in the best shape of their career with a twisted recount of the world around them on new album, DARK.

2020 was a horrible year and no one seems to understand that more than Germany’s Blackout Problems. Their fourth studio album, DARK, follows in the chaotic kaleidoscopic wake of the band’s prior record, KAOS, but innovates with enough fresh blood to make this go-around the band’s crowning achievement.

As with Blackout Problems’ previous releases, DARK is a lengthy affair. Clocking in with a monolithic 75-minute runtime across 19 songs, the most impressive element of this album is that not a minute is wasted and there’s very little filler to worry about at all.

The much-lauded MURDERER opens the record with an electric mix of violent lyrics, screaming “The best politician is a dead one! Get your shotgun out! Get your liars out!” which is equally matched by the thunderous electronic kick drum that persists throughout in an almost anthemic war chant. The song’s message is that of scathing social commentary that tells of the murder of German politician Walter Lübcke. It’s a powerful song that sets things off as they mean to go on.

DRIVEBY is equally venomous. A more conventional song structure, particularly that which features a more prominent lead guitar progression before giving way into hazy electronic fury.  This song is every bit as merciless as the album’s opener. The pitch-black sincerity is what sells songs like this; I believe what they’re saying through the notes that are spun and the words that cut through the impressive instrumentation effortlessly.

Production-wise, DARK impresses across the board. It’s challenging to find fault when the instruments are this nicely balanced. There’s no sense of loudness war, nothing fights for attention or dominance in the mix, instead, there is unison in every corner of this release, a mantra that extends to more than the songwriting or choruses.

LADY EARTH taps into alternative metal territory in the vein of bands such as In Hearts Wake and early efforts made by Shinedown. Here, the drums and vocals take centre stage with an impressively effective choir weaving in and out at pivotal moments. It melds well together and gets the point across favourably.

The best song on this album, in my opinion, is GERMANY, GERMANY where Blackout Problems channel Berlin-based industrial metal titans Rammstein, more specifically the latter band’s 2019 anthem, DEUTCHLAND. Both songs are written in a way that condemns their country’s controversial history, whilst injecting their experiences in a mixture of pain and pride. The conflicted nature of the lyrics in this song cement just how important their country is to them: “Don’t go back into your history, see what you’ve done to me.”

DARK really is an album that’s better experienced blind. I was fortunate when listening that my experience with Blackout Problems was limited, ultimately meaning that I had a fresh palette of which to soak in massive founding music and the polemic message. It’s a challenge to easily surmise exactly how this album falls together the way it does, instead, I would argue that it’s the impact and the weight of the subject matter that so graciously ties this package together.

In closing, Blackout Problems’ newest album is their triumph and an exemplary moment in rock music that demonstrates with ease just how meaningful this genre can be. Poignant, moving, powerful. These are the first words that come to my mind when recounting my experiences with DARK, and I am all the better for having listened through. I recommend you do too.