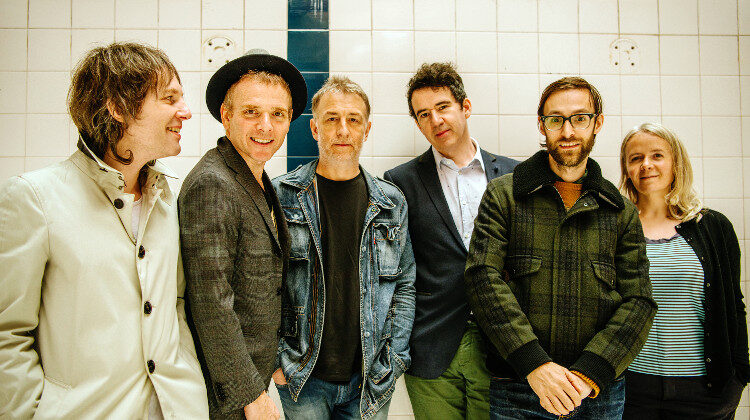 Belle and Sebastian hark back to former glories on their bewitching score for Simon Bird’s sweet and understated slice of life, Days of the Bagnold Summer.

Over the course of almost a quarter of a century, the veteran Glaswegian indie-poppers Belle and Sebastian have provided a reassuring ballast for alienated, bookish and sensitive teenagers everywhere. Both small and big screen have offered a gratifying vehicle for their droll brand of whispery, folk-flecked and poetic pop, which has sound-tracked a plethora of mopey teen infatuations, growing pains and coming-of-age moments in television and film from High Fidelity, Juno and Teachers to (500) Days of Summer.

Their latest adventure, the score for Simon Bird’s film adaptation of Joff Winterhart’s excellent and touching 2012 graphic novel about a sullen teenage metalhead enduring a slow, tedious summer with his librarian mother when his flakily absent father reneges on a promised trip to the US, marks a welcome and surprising return to old school form following the steep decline of the septet’s laboured post- Dear Catastrophe Waitress canon.

The film’s tender-hearted chronicle of small-town ennui and its prosaic, suburban milieu of beige cardigans, shoe shops, libraries, kitchens and diners fit the group’s aesthetic like a glove, as Stuart Murdoch and cohorts shelve the 1980’s synth-pop, funk and soul excursions of recent releases in favour of the pithy, bedsit romanticism, gossamer chamber-pop and melodic grandeur of their formative years. A mix of new songs, instrumentals and re-boots of two classics from their imperious period, Days of the Bagnold Summer operates both as a subtle evocation of the principal themes and images of the film and a stand-alone piece in its own right.

The opening instrumental, Sister Buddha (Intro), sets the scene with its dulcet duet of pretty, acoustic guitars. Murdoch’s famously wallflower vocals sound rougher and less choirboy on the pristine new recording of 1998’s I Know Where the Summer Goes (a highlight of the This Is Just A Modern Rock Song EP), a folksy serenade adorned by an aching violin solo, whose opening lyrical blast of “I know where the summer goes/When you’re having no fun/When you’re under the thumb,” encapsulates the sticky frustration and claustrophobia at the film’s core.

On the gently picked, Sufjan Stevens-like acoustic reverie, Did The Day Go Just Like You Wanted, Murdoch’s keening pipes quiver gracefully like forlorn whispers under blankets as guitars float past like a cloud. The pillow of strings and throbbing brass provide one of the record’s most rousing, goosebump-inducing moments as the song edges towards its conclusion; there’s more than a touch here of the instrumental break in My Wandering Days Are Over from the band’s bejewelled Tigermilk debut.

John Barry’s iconic Midnight Cowboy score has remained a staple influence across Belle and Sebastian’s career and they’ve pillaged the wistful tone of its central theme on more than one occasion, so it’s no surprise to hear harmonica, flutes and strings being flexed around the downcast amble of ‘Jill Pope’. On the sparse This Letter, Murdoch’s softly spoken vocals dance across a bossa nova lilt that’s part Jobim and part Everything But The Girl, decorated by plangent interjections of trumpet, whilst Another Day, Another Night showcases the mellifluous murmurings of Sarah Martin over ripples of lightly strummed acoustic guitars.

Safety Valve is a rarity that’s been circulating for the entirety of the group’s existence without being committed to tape. It’s quintessential early Belle And Sebastian folk-pop, all limpid folk-jangle, close harmonies and soaring violins, draped in reverb. Fan favourite Get Me Away From Here I’m Dying, from the classic If You’re Feeling Sinister, receives a new treatment here that’s stripped down and leaner; its lyrical content segues seamlessly into a film about a misfit teenager trying to fit in and find a place.

The soundtrack concludes on an emphatic note with We Were Never Glorious, a stirring instrumental in which piano, distorted guitar, violin and snatches of dialogue from the film intertwine to potent effect; it projects a rousing euphoria as it cartwheels away in a climax of soft-focus fireworks.

Belle And Sebastian’s early, career-defining work represented a consummate marriage of classicism and craft that was out of sync with the prevalent rockist strains of 90’s indie and alternative music – alt-rock, grunge and Britpop. It’s therefore refreshing and surprising to hear a seemingly increasingly relevant and stale act ditch the pallid window-dressing and revert to something approaching the spirit, sonics and wide-eyed wonder of those epochal and glistening releases.