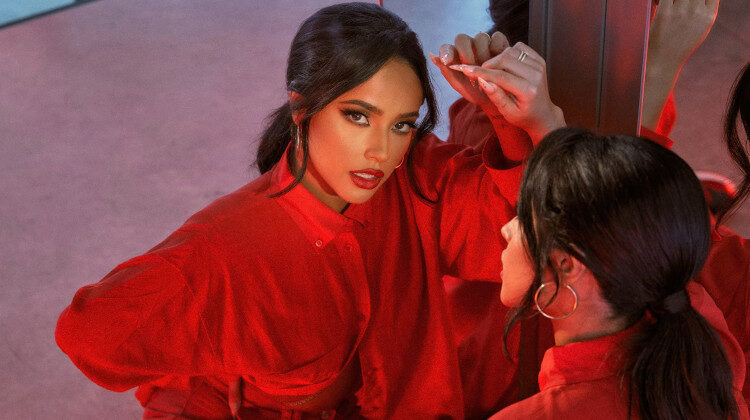 Becky G’s ESQUEMAS teaches us that the only time you should be looking back is if you’re looking at yourself in the mirror. The result of this self-reflection is her most personal, confessional album yet.

“Look back at it / lights, camera, action, / Definitely the best of the scene,” says Mexican-American singer Becky G on the break of Chicken Noodle Soup — her 347-million (YouTube) view hit made with BTS’s J-Hope back in 2019, following a string of similarly high-profile collaborations across the previous two years (Bad Bunny, Daddy Yankee, Christina Aguilera, David Guetta) which catapulted her to international fame. Her debut album, MALA SANTA, would be released just three weeks later to widespread critical acclaim.

‘Lights, camera, action’ it may now be for Becky G, whose work both within and outside of the music industry has attained her superstar status (not everyone can claim to have interviewed the Vice President of the USA about politics as part of their lockdown podcast — a project in which she continuously donated $10,000 to charity after each episode). ‘Definitely the best of the scene’ she also is, with her songs having been certified everything from gold to multiplatinum in multiple countries, and with herself having racked up a similarly impressive array of precious metals on her trophy cabinet after winning over 25 awards since the start of her career. Looking back, however, isn’t quite in the cards anymore: as she sings on the 750-million-stream smash-hit and her highest-charting single, MAMIII featuring KAROL G, “I don’t look back anymore, not even to park”.

That forward-facing, devil-may-care attitude is clear to see across the rest of her second album, ESQUEMAS. Recent collaborations with Christina Aguilera (Pa’ Mis Muchachas), and Natti Natasha (RAM PAM PAM, which appears on ESQUEMAS) have established her as a frontrunner of feminist representation in Latin music, which is only more evident from the lyrical nuance expressed across each of her songs; whether she’s angling for something romantic (FLASHBACK, BAILÉ CON MI EX), something more sultry (FULANITO, TAJÍN, UNA MAS), or tearing into a useless ex or two (“You’re seeing everyone here / They’re all waiting in line for me / You want to deny it, I know, I already understood / I’m better without you,” she sings on RAM PAM PAM), Becky G is undeniably unashamed of who she is, and that means all of who she is. More power to her, and to the millions of women who her music has undoubtedly resonated with. Like she says on opening track BUEN DÍA, whose bright piano chords could never prepare you for the brash, confident vocals that suddenly kick in fifteen seconds later, “Listen well, I’m going to give you some advice / […] People talk a lot and life is very short”.

The message is clear: do what you want, and feel proud of who you are. The message could be enough to warrant positive reception, but the music itself is on par too; albeit with a slight lack of variety. Its two key players are punch-packing songs with driving rhythms that reinforce her status as reggaeton royalty (FULANITO, TAJÍN, GUAPA), which bracket the more low-key, dreamy pop that occupies the (slightly sagging) centre of the album until its energy is revived by its lead singles (RAM PAM PAM, NO MIENTEN, MAMII). Then again, you’re unlikely to hear anyone complaining if you queue ESQUEMAS for your party playlist —  because no matter what Becky G does, she does it well.