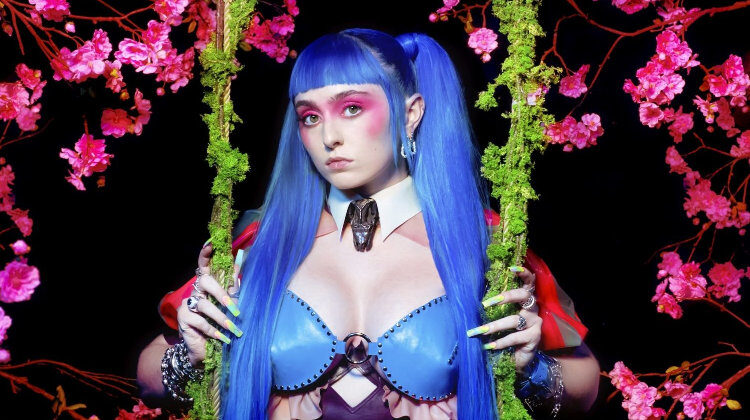 Ashnikko releases debut mixtape Demidevil, a bold, frank and entertaining record on so many levels. With the distorted TikTok-esque lofi bass cluttering the noisy soundscape of most of the tracks, Ashnikko uses her sound to assert herself as a force to be reckoned with; through brazen lyrics addressing subjects such as women’s rights and relationships.

While the outrageousness and mélange of sounds isn’t always on the money, the occasional injection of humour allows for a sense of freshness to each track. Moreover, it’s exciting to see a woman create music in which she is nasty, unpalatable and bitterly honest; especially when done in such a creative and intelligent manner.

Feminism and women’s experiences pervade all facets of this mixtape. The opening track Daisy subverts a symbol associated with innocence and weakness, emphasising how daisies can withstand harsh conditions and bloom in dark environments. Others reflect on Ashnikko’s toxic interactions with men (“Women hold the weight of the world/But you still talk down and call me little girl”, Little Boy), while Slumber Party ft. Princess Nokia discusses female same sex relationships.

Many of the tracks treat serious topics with a humorous tinge, but Good While It Lasted takes a more serious and reflective approach on Ashnikko’s relationships towards the close of the mixtape; as she requests “Forgive me for the nasty things I said when I am wounded”. These subjects combined with an abundance of noughties nostalgia (Toxic inspired by Britney Spears and the Kelis sample in Deal With It) provides a youthful, fresh take on these issues. This is most prevalent in L8r-Boi: an homage to Avril Lavigne’s Sk8er Boi in which Ashnikko posits what would happen if Sk8er Boi was not so heavily desired by the female protagonist (spoiler alert: he ends up alone “with his hand on his balls/Still punchin’ holes through his basement walls”).

What really defines this mixtape is the lyricism. Ashnikko’s lyrical style is unapologetic, funny and assertive. The imagery is vivid (“I put that teddy bear you gave me in a blender/I drew a dick on all your sweatshirts”, Deal With It ft. Kelis) and although at times this technique can become a little overused, it mostly emphasises the themes of womanhood and nostalgia well.

This is executed brilliantly in the final song, Clitoris The Musical which originated as a YouTube skit. Complete with musical theatre piano accompaniment, it’s hard not to be thoroughly entertained by lines such as “It’s like an arcade game, your hand is the claw/The teddy bear is my orgasm that always falls”.

Demidevil is a remarkable achievement for a debut mixtape. Even if the frank style and in-your-face lyricism may become overbearing at times, it would be unfair to allow this to cloud the sheer intelligence behind the composition of this release.