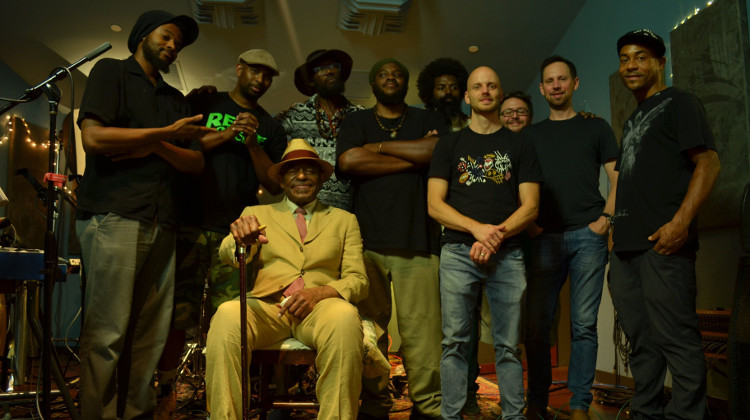 Archie Shepp, the 82-year-old jazz icon, shines on an edifying, fluid and thrilling maelstrom of jagged jazz and booming hip-hop that transcends the dilution, novelty value and timidity of crossover records.

Ever since emerging in the turbulent 1960’s as a consummate free jazz trailblazer, passionate educator, ‘New Thing’ progenitor and guiding light of Afro-centric black protest music, the saxophonist, playwright, poet and composer Archie Shepp has sought to articulate and illuminate the black American experience through self-determination, rage and polemic. From his early work with Cecil Taylor through to his canonical outpourings on the Impulse label culminating with his incendiary 1970’s sets, Attica Blues and The Cry of My People, his unvarnished soundscape has always simmered with fiery intensity and social commentary.

Shepp’s latest offering, Ocean Bridges, a three-way collaboration with rapper Raw Poetic and DJ/producer Damu The Fudgemunk, represents his first recorded engagement with hip-hop, built from live improvisations in the studio which capture much of the raw spontaneity and unburdened urgency of the innovators of his heyday whilst anchored by a burning curiosity beyond that of the traditional jazz audience.

Ocean Bridges commences with a brief snippet of spoken-word murmur which acts as an exhortation for hip-hoppers to let the music swim and breathe, a sentiment which operates as a mission statement for the whole record. Rather than descend into a tasteful, box-ticking exercise (think Guru’s Jazzmatazz) where each flavour sits restrained and politely or strains to coalesce, the album’s strength lies in its bonding through intuition and mutual verve as well as its sure-footed facility for harnessing, blooming and elevating its diffuse ingredients.

From here, we are taken to Learning To Breathe, which smoulders with the fanfare of some trademark Damu wizardry with a panting sample and darting stand-up bass by Luke Stewart, before exploding with the leader’s impassioned, throaty brawl in the background as Raw Poetic’s whip-smart delivery builds a dust-caked funk momentum amidst keyboard jabbing, flaring percussion and honeyed vibraphone. This segues seamlessly into Professor Shepp’s Agenda 1, whereby the veteran firebrand downs his tools and delivers a troubled meditation on black American ghettos and education as a through-line: “Education should be available to everyone, and people shouldn’t have to pay to be educated, anymore than we pay for air or water…”.

The precision-tooled Tulips steps into the fray as a tornado of propulsive dynamism moored by the commanding Shepp’s hearty balance of earthy scream and rich, burnished lyricism, punctuated by Raw Poetic’s infectious rhymes. The spiralling Aperture begins as deeply funky, Afrobeat-scented free jazz with Shepp and tenorist and clarinet player Jamal Moore engaged in a throttling duet akin to a frenzied game of head tennis, splashed with succulent vibes and mesmeric turntablism.

Elsewhere, the spiritual mood of Moving Maps sets up the heated joy of an insistent modal vamp with the rapper’s bonnet-of-a-Porsche chops floating around and under the probing, percussive ebb and flow and the sinuous assurance of Shepp’s rich and rounded soul-jazz tone. Searching Souls ushers us in with guitar twinkle and fruity tenor sax before Raw Poetic establishes a scathing fury over the jazz giant’s gathering storm.

Ocean Bridges might be hailed as a breakthrough for fusion or crossover, but it’s undoubtedly driven by the undaunted gravitas and muscle of jazz, if funnelled through the scampering, soul-searching spirits of poetry, rap and funk. This is the noise of kindred spirits pulling themselves deeper into each other’s sonic worlds, forging a new slipstream and weaving a grand, ambitious tapestry: jazz lives on.