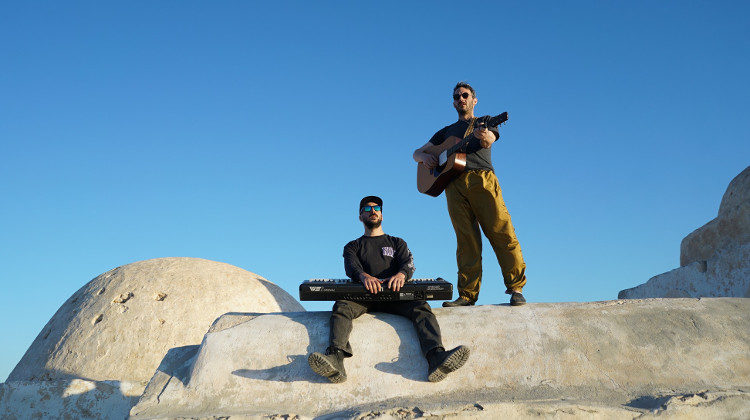 The debut album from duo Arabnormal is a half-hour journey to somewhere otherworldly that you will want to experience over and over again and again.

Arabnormal is regularly described as ‘a manically zonked-out flying carpet ride’, and if that doesn’t perk your interest then what will? Formed by former The Hickey Underworld frontman and main songwriter Younes Faltakh alongside ex Das Pop member Niek Meul, they shipped themselves off to Oslo to record this 10-track adventure of a debut album.

Opening with Scorpio, which sounds like it’s taken straight from a stealthy spy thriller, saying it is a strong start to the album is an understatement. With minimal use of vocals, these are used more as an instrument within the composition as opposed to the main focus of the track (which is the same throughout Arabnormal). Everything is layered to perfection, never feeling out of place or overplayed.

Creating a spacey atmosphere, it then leads into the second track, Dominion, introduced with frantically strummed guitars into a body shaking overdriven riff and surrounded and engulfed by a wobbled bass and multiple synthesisers. Once it reaches the break 2 minutes in, it suddenly becomes bizarre and interesting (more eastern-inspired than what we are used to in western rock and pop).

In fact, the album doesn’t ever get boring due to the immense range and expert use of dynamics. The slower track, Digital Veil, is the most standard rock ballad on Arabnormal but it still avoids any clichés and is followed by the quirky song Bubble. None of the 10 tracks are structured necessarily like a regular pop song, rather playing out like a symphony. It is composed more similarly to a classical piece, with no pretentiousness about it. Instead, it is a musically beautiful and other-worldly journey, all whilst replacing an orchestra with rock instruments.

Though at times it appears Arabnormal begins to slip into modern rock tendencies, it quickly catches itself and is completely (and effortlessly) unique. Not once does the album feel redundant or rehashed at all – Crybaby, for instance, is very Post Punk but the duo easily give it their own identity. If you enjoyed Iggy Pop and Josh Homme’s 2016 collaboration Post-Pop Depression, or the young but talented band Broken Hands (both with their atmospheric-yet-aggressive production) you are sure to love this. Every single track has its place and comes at the exact right time. It is a new essential listen for the ages.