Home » articles » Another Sky: I Slept On The Floor – Review 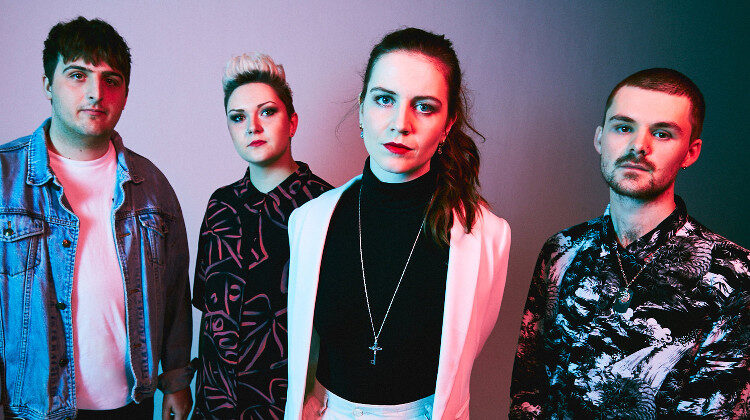 London based band, Another Sky, give us atmospheric pop that is fronted with a powerful voice and driven by politics on their debut album I Slept On The Floor.

Having made a small impact for a short while – appearing on Later With… Jools Holland in 2018 and on the FIFA 20 soundtrack – quartet Another Sky finally release their debut album, I Slept On The Floor. Meeting at Goldsmith University in London, they comprise of two female and two male members, with much of their lyrics being heavily political. With more British musicians using their platform to have their voice heard, does this affect Another Sky’s music negatively or, alternatively, give it power?

First track, How Long, has a two-minutes long intro that musically showcases the musicianship and tone heard for the entirety of the album. It is a soundscape that weaves from slow Spaghetti Western to heavy breaks similar to Mogwai. Once lead singer Catrin Vincent’s utterly unique voice is heard, all attention is turned to her. The music almost definitely could be picked up for use in films, with its darkness and ability to tell a story spectacular, but her voice is so powerful  – at times overwhelming – that it removes all possibility.

Biffy Clyro, after seeing their appearance on Later With… Jools Holland were so impressed that they offered Another Sky a support slot on their UK tour and it’s easy to see why. The band are on the same airwaves as Biffy or Imagine Dragons, musically trying their best to remain alternative whilst holding onto pop rhythms and tendencies, all with a strong deep voice at the forefront. The songs on I Slept On The Floor may change in tempo or velocity, but once you’ve heard one, many will have heard all they needed to hear.

Tree, the eighth track, is the most heartfelt. It’s practically just Catrin’s vocals with Jack Gilbert’s picked guitar drenched in feedback, slow and piercing. With the way Catrin projects her voice, it is often hard to understand her words (which can ultimately affect her political messages being put across), but for this song it is beautiful, almost making it sound like an old Celtic folk song. After 3 minutes, the rest of the band are introduced, hammering on their instruments and kicking everything up a level rarely seen on the rest of the album. Though it could never be an A-Side, it most definitely would become one of those B-Sides more popular than the latter.

Upon reading or watching interviews with Another Sky, it is clear to see politics are very important to them. Catrin says that “My family always spoke about politics. I feel like it’s in my blood.” and that “growing up in a right-wing town taught me to question everything”. Each song touches on a different message, for example, Avalanche is about Brexit, Trump and #MeToo, whereas The Cracks “charts a generation facing extinction”. I Slept On The Floor sadly, as a result, screams middle-class agenda and self-importance. Unable to do what punk did in the seventies, or grime is doing right now, Another Sky aren’t real enough for people to connect with. This eventually gives their message, when able to be understood over Catrin’s tone of voice, little substance or relatability.

With so much good press and promise, I Slept On The Floor is disappointing. There will be many who love it, but it is way too divisive and repetitive to class it as a good album. Furthermore, musically there is only a select few who will grasp onto it, as what would have made the band unique became the norm a decade ago. Another Sky are sure to stick around, perhaps may even surprise us on the next album, but for now, it looks like they’re destined to play the afternoon slots year-after-year at Reading and Leeds.