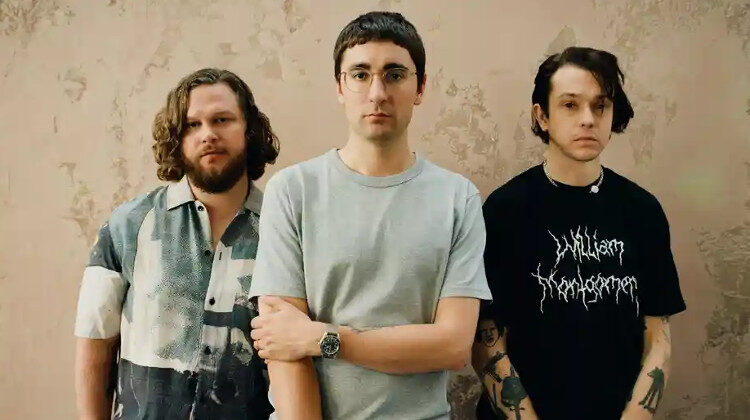 Their most personal record to date, The Dream pens the pains, fears and complexities of modern-day life.

Since they exploded onto the scene in 2012, alt-J have been known for their wonky, experimental sounds and lyrics that centre around dark, obscure post-modern pop-culture; the song Taro off their debut album is a nod to Spanish Civil War photographer, Gerda Taro, and details her partner, Robert Capa’s tragic death; and Fitzpleasure retells the story of ‘Tralala’, Hubert Selby Jr.’s short story about a prostitute who dies after being gang-raped and raped with a broom.

But if the pandemic gave us time for anything, it was self-reflection, and that couldn’t be more evident on the boys’ latest release, The Dream. The sounds are sparser, the pace slowed, and each of the songs feels more tender, as if they have been nurtured.

And perhaps for the first time, the trio have opened up and bared themselves for this record. Get Better, a personal favourite, opens with a single acoustic guitar and remains fairly untouched throughout, giving Newman’s tender writing space to breathe and blossom. In a press release last year, Newman revealed that the song was a fusion of two previous versions. ‘The first was an improvised song I sang in 2018 to my partner who was suffering from period pain. To her I sang “Get better my Darcy, I know you can” … The second was a chord structure I worked on in lockdown that focused on someone living through a bereavement.’

What starts as a heart-crushing plea ends in a message of hope; an affirmation of certainty: ‘Get better, my darling / I know I will.’ It truly is a song for our time, even paying tribute to frontline workers – ‘they risk all to be there for us.’ ‘I hope that it’s emotionally the most honest song I’ve written,’ Newman stated.

The bells and whistles are dialled back for ambient, echoey Losing My Mind as well. Inspired by the murder of a childhood friend and Newman’s preoccupation with the sinister, this ambient, echoey track explores the mind of a serial killer, and in many cases, the horrifyingly small differences between them and the rest of society (‘You and I / Cut from the same cloth’). But despite the song’s grim subject matter, there’s something strangely relatable about it; that endlessly looping bridge a triggering reminder of the savage blows two years of a pandemic has inflicted on our mental health.

But, of course, it wouldn’t be an alt-J album if they didn’t throw the weird and the wacky in there as well. Take the lead single, U&ME. It’s a slow burner with a steady, subdued rhythm and timid percussive elements spattered throughout. But that kind of slinky sound only lends itself to the lyrics – a story of one man’s devolving euphoric drug trip, a cherished ‘summer holiday’ memory. And there’s Bane, the intense intro to the record stashed with eerie atmospheric sounds, a thunderous beat and a choral arrangement that could shake the heavens. Naturally, the song delves into addiction through none other than a love for Coca Cola (‘ice cold black fuel’) and hyperbolises it to the extent of selling one’s soul and drawing comparisons to Jesus’ death (‘my God / Why hast thou forsaken me?’). Very alt-J indeed.

Quippy, satire, Hard Drive Gold, all about the boom and bust of the cryptocurrency market, and house fuelled Chicago inject shots of energy into The Dream; the former set to funky, bass-heavy tones and 80’s inspired keys electronica, and the latter sounding somewhere between Radiohead’s Burn the Witch and The XX’s I See You era.

The Dream closes with a simplicity rare for alt-J; Powders is about a meet-cute between a boy and girl at a perfume counter, with excerpts from their conversation set to a languid melody and powder-light harmonies. The sharp break from the record’s overarching themes of tragedy and misery leaves the listener with a message: embrace the little things in life. The small things that make it worthwhile. Perhaps that’s what alt-J learnt in last two years.