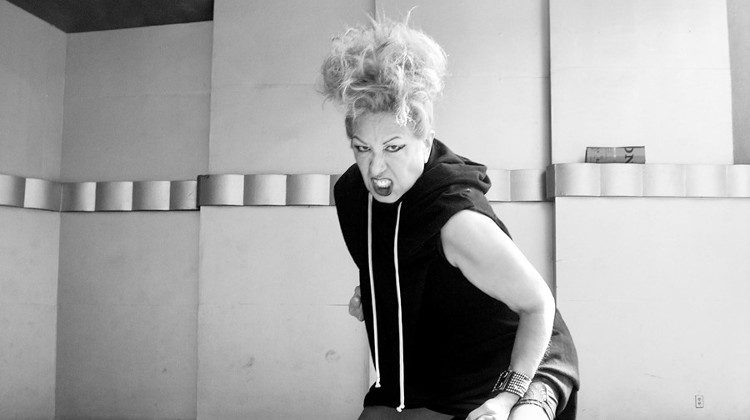 Sister Dynamite goes all out with unrelenting punk energy and is a throwback to Alice Bag’s previous incarnation of her original first-wave punk band, The Bags. This is a play on insults that certain types of men dish out when confronted by a woman who has her own unique ideas. There is a ‘she’s a bag’ syndrome which is inevitable when inadequate, pathetic men feel threatened by a strong woman with the whole album being a feminist rally cry. I understand this as it turns those kinds of reactions on its head and thereby empowers the women who receive the insult. I assume this has been the experience of Alice, hence the title.

However, not all masculinity is fragile and on a personal level. I welcome a masculine man provided he is a thoughtful and intelligent masculine man that treats women well. A lot of feminist writers and performers have plenty of intelligent views to share with society and the feminist writer Camille Paglia is just one example. However, some feminist voices do not and should be treated with the same objectivity as any other literature or music. Feminism is sometimes one-sided and can condemn men in exactly the same way as some men condemn and generalise women. I don’t think that Alice Bag is doing that, however. The phrase ‘Fragile Masculinity’ is repeated in the title track and that statement can have layers of meaning that I don’t have room to examine in this review.

That aside, this album has spirit ideas and energy. Women need a lone voice such as this from Alice Bag who is applauded as L.A.’s original punk by The Los Angeles Times with the emphasis on a strong survival instinct never more welcomed than now amid the pandemic. Featuring contributions from riot grrrl original Allison Wolfe on the standout track Breadcrumbs, it’s a clever reference to often used symbolism in ‘Fairy Tales’ and indeed the general assumption that women should be grateful for meagre rewards and not ask for more. As the lyrics state: “You Must Believe in a Happy Ending”.

Switch Hitter is a celebration of bisexuality as she sings “Either way is a good way”, and even after all these years of bisexuality, it feels refreshing in an open way. The recently released single from the album, Spark, is as self-expressive as the rest of the album: “Even when I try to be normal I always miss the mark”.  To be honest, I can totally identify with this statement and so can many people whether they are straight, gay or bisexual. ‘Trying to fit in’ is a common problem that affects all of human nature and that is one of the good points of this album; it does not just speak to the LGBT community but raises many points of the human condition that we can all relate to, whether this is ‘fitting in’ or self-forgiveness and self-acceptance.

The social commentaries on this album are strong and expressed very well. Sister Dynamite is a smart and sassy record that throws out many interesting social points.