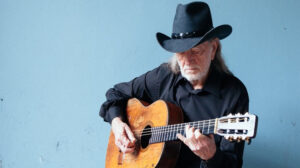 Country legend, Willie Nelson, graces us once more with latest album First Rose Of Spring, not venturing far from what has previously earned him 10 Grammy Awards. Willie Nelson has outlived most of his peers, but now at 87-years-old, he is still going strong, artistically. Releasing his 70th solo album, there has rarely been a year of his career where he hasn’t put out work. … END_OF_DOCUMENT_TOKEN_TO_BE_REPLACED