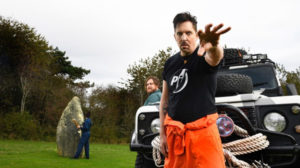 The Imbeciles self-titled debut is a mayhem of sound with an acquired taste, distinguishing its purpose in modern music. The Imbeciles, an amalgamation of musicians from London, Los Angeles and Texas, recently released their self-titled debut – a hardcore experimental whirlpool where each song barely reaches two minutes. Recorded directly onto two-inch tape (on the … END_OF_DOCUMENT_TOKEN_TO_BE_REPLACED