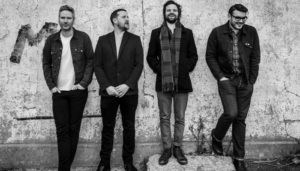 Powers, the latest album from Futureheads, sees a return to their gritty approach to music, post-punk vibrations and crowd-pleasing energy choruses. The Futureheads are well known for honesty in their lyrics. Frontman Barry Hyde released an album which detailed his struggles with depression in 2016 and new record Powers is a collaboration, once again, with the rest of the … END_OF_DOCUMENT_TOKEN_TO_BE_REPLACED