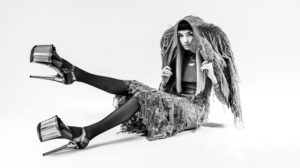 Pop-metal has never been in such a strong place than with the intricate, intense and diverse work on the new Poppy album, I Disagree. Poppy, an American pop-metal artist, has released an album so incredibly unique it can be difficult to wrap your head around it if you aren’t familiar with her previous creations. The 25-year-old described her album as the process of … END_OF_DOCUMENT_TOKEN_TO_BE_REPLACED