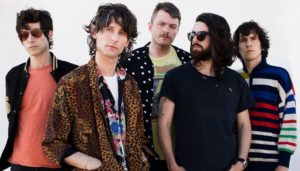 The second release from CRX and one of the most influential guitarists of the 20th century, Nick Valensi is groovy, overwhelming, and energetic  CRX, the side project of The Strokes guitarist Nick Valensi, are almost a secret amongst music fans. With the release of their first album, New Skin, in 2016 – Valensi proved he didn’t need to rely on his other Strokes bandmates. New … END_OF_DOCUMENT_TOKEN_TO_BE_REPLACED