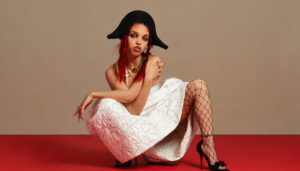 FKA twigs lets it all out on the plucky, odd and undoubtedly frank long-awaited album MAGDELENE, released through Young Turks.  As a rightly heralded, young female musical oddity, FKA twigs had plenty of intrigue from media quarters about her movements and motivations at the time of releasing her 2014 album LP1. Then in 2017, an already fascinated public became aware of her … END_OF_DOCUMENT_TOKEN_TO_BE_REPLACED