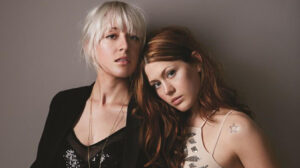 Grammy-nominated sisters, Larkin Poe, massively miss the “unexplored terrain” they believe they have found on their fourth studio release, Self Made Man. Music is obviously in the blood of sister duo Larkin Poe, having been raised in Atlanta and based in Nashville – both major musical hubs across the Atlantic. With their fourth release, Self Made Man, the sisters believe … END_OF_DOCUMENT_TOKEN_TO_BE_REPLACED