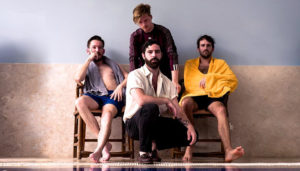 With over 4 million monthly listens on Spotify, the Indie-Rock band Foals have revealed the second part to their album Everything Not Saved Will Be Lost.  After dropping the record just seven months after their previous release, concerns were raised that both albums may be too similar. However, Foals never disappoint, and with a guitar-led, darker atmosphere, it was … END_OF_DOCUMENT_TOKEN_TO_BE_REPLACED