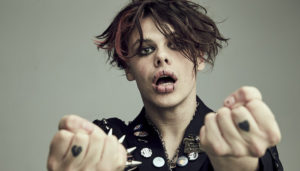 Known for his plain-spoken, sensitive and politically charged topics, YungBlud (also known as Dominic Harrison) has released his rebellious EP, The Underrated Youth. A record to show his fans that you are never alone in how you feel and that being ‘cool’ is overrated. YungBlud, an advocate for misfits has had millions of stories sent in from fans which has helped form … END_OF_DOCUMENT_TOKEN_TO_BE_REPLACED