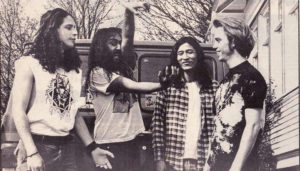 September marks the 30th anniversary of Louder than Love, the major label debut of Seattle supremo’s Soundgarden. We take a look at the band in a transitional stage of their career and the album that bought the grunge heavyweights to the attention of the mainstream. Soundgarden formed in 1984 and were a huge part of the Seattle scene from its inception. They signed to Sub-pop … END_OF_DOCUMENT_TOKEN_TO_BE_REPLACED