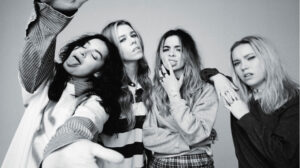 The Aces take a catchy edge and fill it with testing lyrics and upbeat energy on new album, Under My Influence. If you haven’t heard of American Indie-Pop band The Aces you’re clearly missing out. Their new album Under My Influence is a fun yet sassy record which touches on situations that most teens find themselves in. Bringing a sense of empowerment, the lead singer … END_OF_DOCUMENT_TOKEN_TO_BE_REPLACED