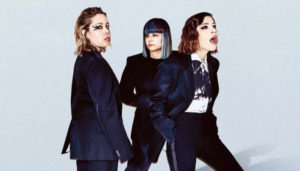 Sleater-Kinney release new album The Center Won't Hold with an almost androgynous feel and themes based around machinery mechanical sounds, and robots.  The title track The Center Won't Hold and Hurry on Home both have a stark and bold atmosphere. The Center won't hold, in particular, sounds as if it was recorded with a working factory as a background. This album has an … END_OF_DOCUMENT_TOKEN_TO_BE_REPLACED