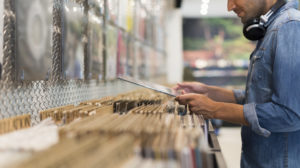 According to the UK’s official charts, only one album in the top 10 selling vinyl records over the last decade features new music. That record is Arctic Monkeys 2013 album, AM, coming in at number 7 on the list. Sitting around this is a plethora of reissues and compilations including many classic albums such as The Beatles’ Sgt Pepper’s Lonely Hearts Club Band, Nirvana’s … END_OF_DOCUMENT_TOKEN_TO_BE_REPLACED