Face Down in Meta 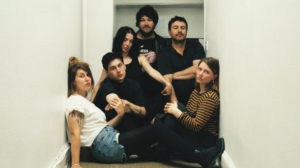 Pet Shimmers follow up a barrage of singles with their debut record, Face Down In Meta, so we take a listen to the new record with a track by track review. Pet Shimmers first appeared on the music scene in 2019, releasing several singles which will also be featured on their debut record, Face Down In Meta. Songwriting maestro Oliver Wilde fronts the project and pulls … END_OF_DOCUMENT_TOKEN_TO_BE_REPLACED