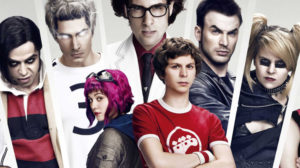 When you take up the mantle of directing a film adaptation of an unfinished cult graphic novel about a 90’s slacker, his garage band and their adventure in music, love and life, Director Edgar Wright had one man in mind for the Scott Pilgrim movie, and that man was Beck. It takes a brave man to take on a film project like Scott Pilgrim. In what some may describe as niche, … END_OF_DOCUMENT_TOKEN_TO_BE_REPLACED